What an exciting few months it has been for the Gottschall family.  Prior to me leaving for my trip to Hollywood, my husband won his flight AND the shoot out, in our golf clubs Member-Member tournament.  Next came all the excitement of my trip to Hollywood, California, which was a truly surreal couple of days.  My flight took off and landed without a hitch and was as smooth as a baby’s bottom.  Upon my arrival at LAX (Los Angeles Airport, I checked into my Hotel and headed straight for Melrose and Rodeo Drive.  I had the entire day to myself to shop, take in the sights, eat fabulous food and rub elbows with fabulous people. 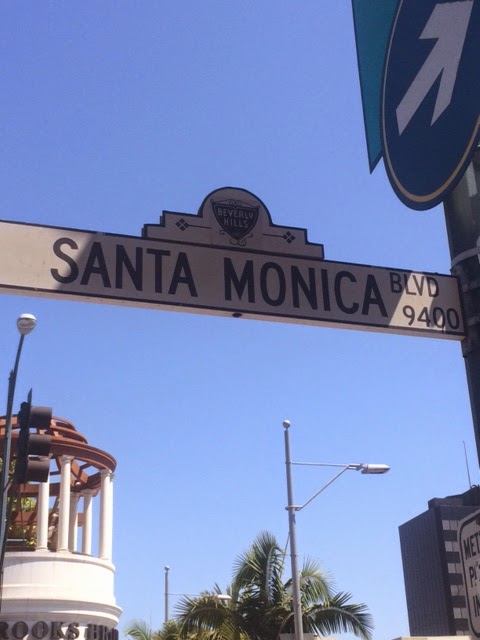 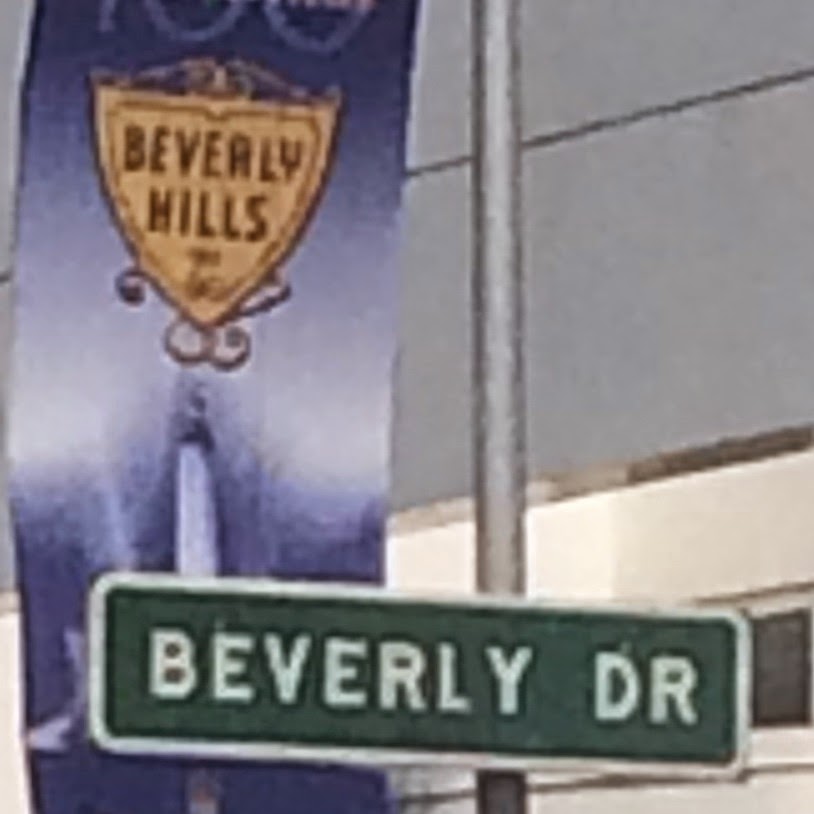 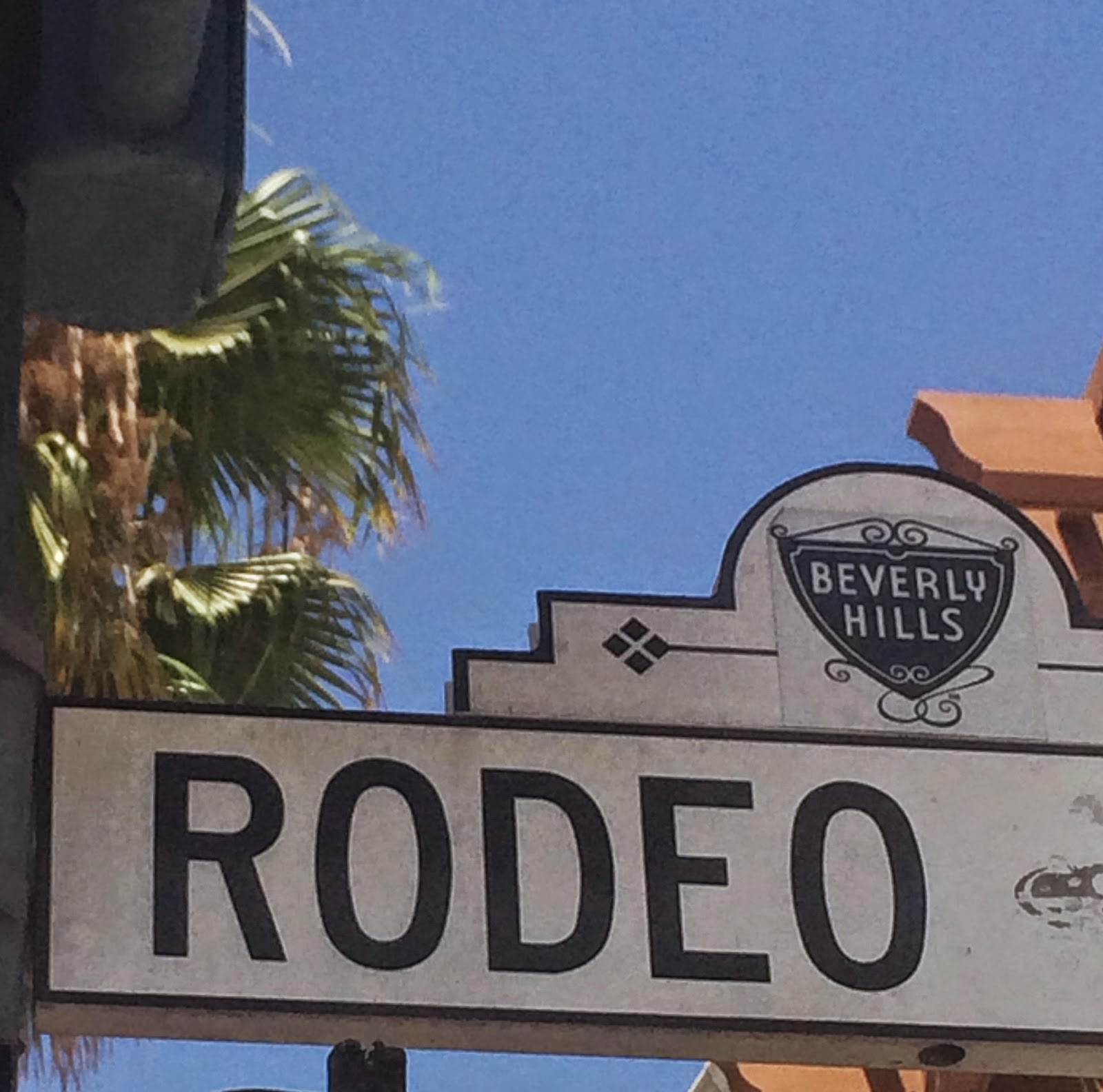 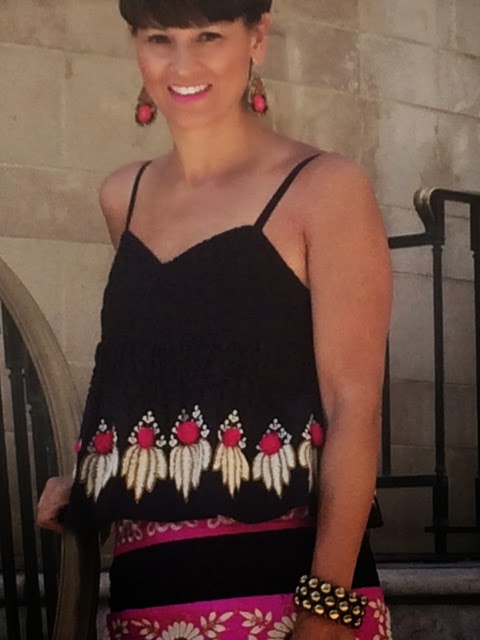 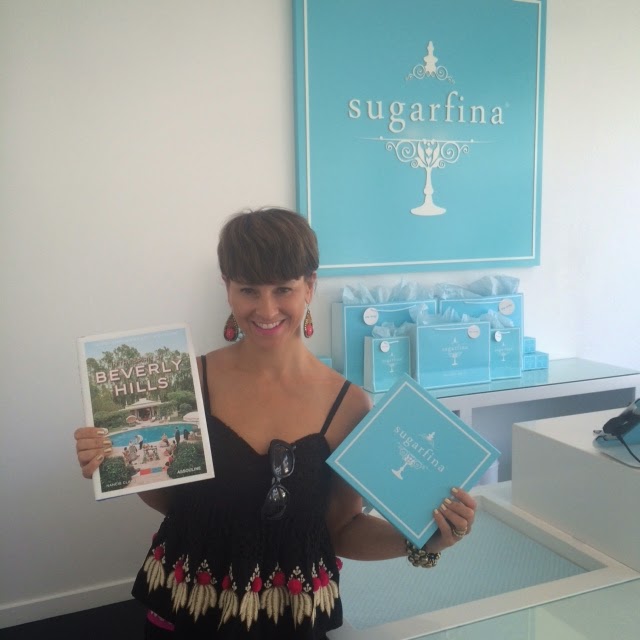 That evening I met a girlfriend from Santa Monica for the best sushi in town.  It was odd that on a Monday night, where on the East Coast, you wouldn't dare eat sushi and most restaurants are closed, that this place was packed to the gills.  People were coming and going as if there was a fire sale and the sushi was unlike any sushi at home, amazing.  The place was a off the beaten path, yet there was a valet to park the cars, so odd, parking everything from Toyotas to Bentleys.  The place was a gold mine.

Exhausted that evening from my travels, the anticipation of the big day, sore legs from all the shopping and walking and then out to dinner had my hotel bed calling my name.  I couldn't get to my bed fast enough after scrubbing the make-up off my face first.  I was out like a light a soon as I hit the pillow.  After eight solid hours of sleep, I rose at 5 am, took quality time to wake up, shake the nervous energy and excitement and begin my shower relaxed and with a smile.  I still couldn't believe where I was and how blessed I was to be there.  In the shower, with tears of joy streaming down my face, I went over in my mind, all the hard work I put into earning the attention I needed to get here.  Building a blog chock full of content was key and I knew it.  The more blogs that I created, the more it would captivate someone's interest and this time it was someone incredibly important, a senior producer of a major television network who stumbled upon it while searching the web for raw talent. 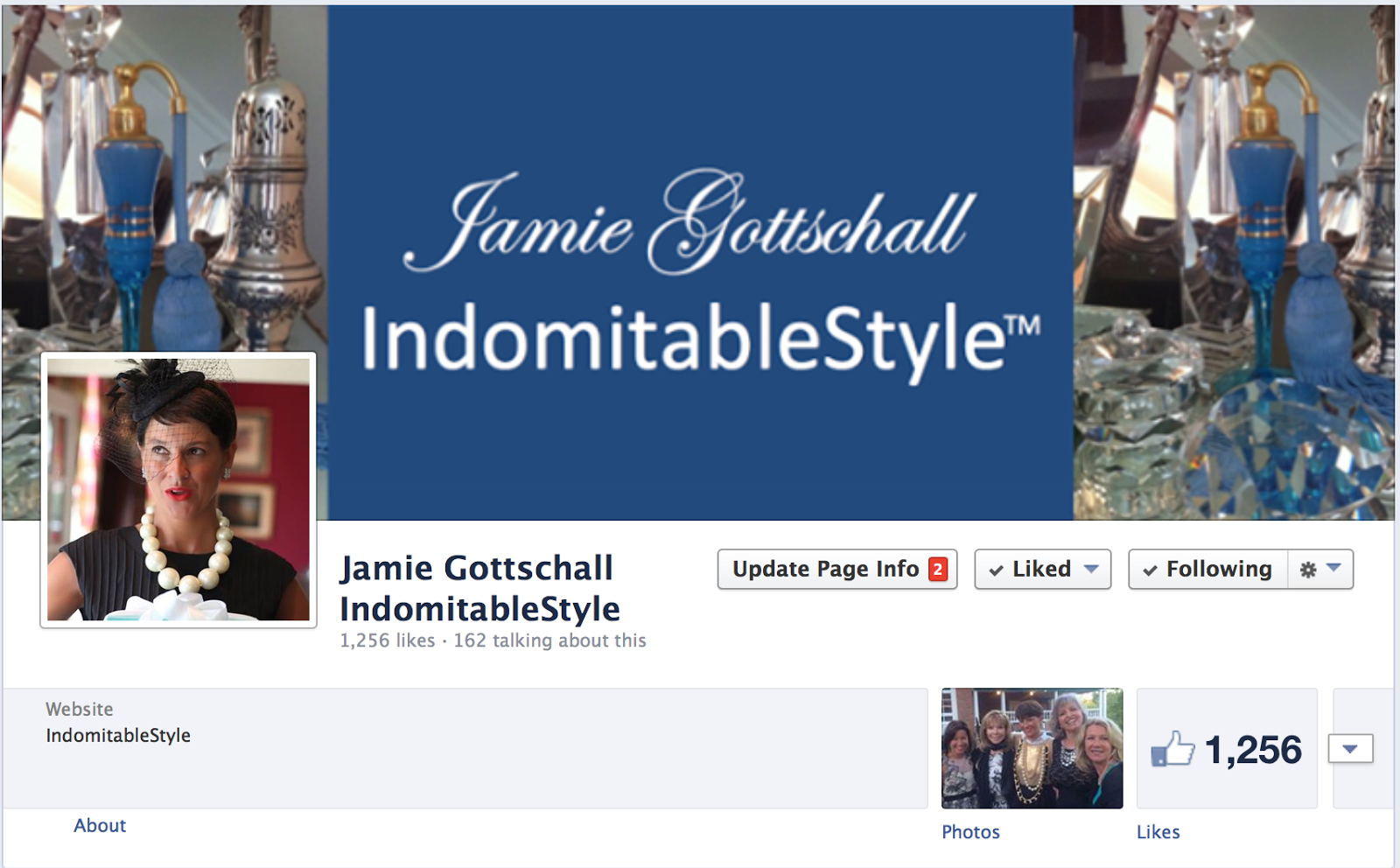 I made myself up and dressed to the nines, wearing a bold statement piece around my neck.  One of the producers came to my hotel to pick me up and take me to the studio.  California Dreamin' was putting it mildly.  The sun was shining bright, yet there was a light breeze, the air was fresh and the mood was energetic, everyone was fit and beautiful.  When we arrived at the gates of Universal Studios, I couldn't believe I actually made it.  Finally, after flying straight across the other side of the country to fulfill a lifelong dream, I had arrived.  We drove through what appeared to be props of old western dirty and dusty towns with saloons, shops etc, until we hit an area full of trailers and a single house.  It was that moment, I knew we were "home."  We arrived at the scene of "the house" where Hallmark's Home & Family Show airs daily in front of a live studio audience, only this time, I was up to bat.  We hopped out of the car, and I was immediately escorted to the trailers "green room" where I hung up my ensemble, parked my bags and sat with a young and charming producer who had me sign my life away as he asked me many questions about myself, my brand and my life in general.  He introduced me to the other guests in the room and the make-up artists who were getting everyone "camera ready."  (With high definition TV, it's imperative you look good because it is as good as being placed under a microscope, crystal clear and no room for flaws).  Immediately following my meeting, I was ushered outside where an area was set up for me to demonstrate how to spray paint the bags, that I was creating for the show. 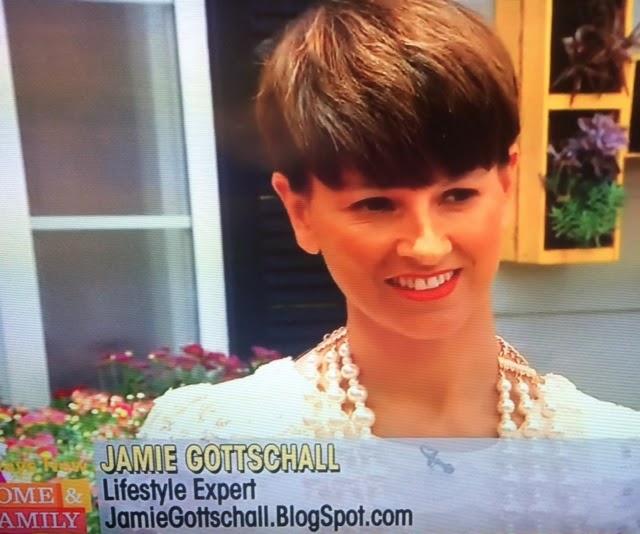 I couldn't believe my eyes as a crew of at least ten camera men stood before me on many levels and I mean on ladders, step stools and bend and knee to capture my every move.  This was it, the real deal.  I was in front of Hollywood producers, directors, cameramen and a full crew.  What more can I say, I felt like a star and on that note, I did what I do best without a hitch, and did it in one take.  Back to the trailer I went and waited, traded stories of what brought us to the show with the other guests.  Next thing I knew, it was time for lunch.  As I stepped out of our trailer, a fully catered buffet lunch was served under tents.  Is this for me too, I asked?"  "It's for everyone my segment producer replied."  It truly was the royal treatment and so far, my experience was more than I ever imagined it would be.  Next thing I knew, I was told to change into my dress and be "camera ready in 15." 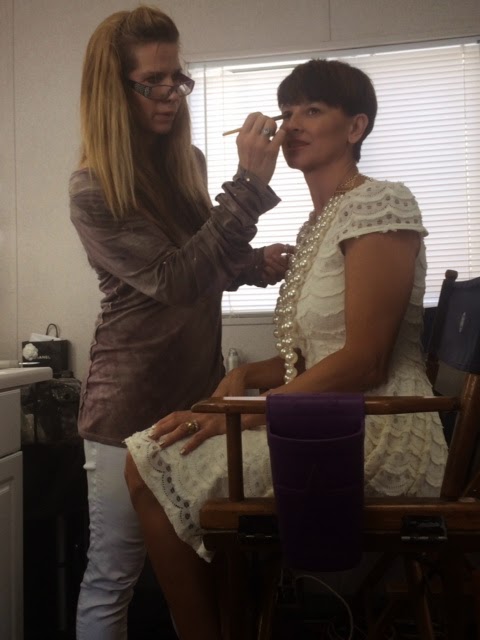 Before I dressed, I was pulled aside by the make-up artist, where she touched me up around my eyes.  In walked my producer and ushered me to the back porch of the house, as he was being directed through his headset.  The entire staff was in communication via these headsets, so everyone knew where to be at all times.  The "props" girl was there setting up my work station, securing down brown craft paper for me to work on.  As I got even closer, I saw cameramen setting up in the distance near what appeared to be a stage with stools for the hosts and guests and seating for an audience.  I heard a humming and turned my head to the left.  Approaching was a caravan of Universal Studios tour busses, filled with peeping passengers as they began waving to us as they snapped their cameras.  Really?  Yes, really.  I returned the favor, smiling and waving back.  I began setting up shop, styling all of my props on the craft table.  Really it was the job of the props girl, but she told me to keep going as I was doing an amazing job.  They watched my every move and complimented me endlessly on my talent.  My segment producer set me up behind the table and went over what I needed to rehearse for my intro.  I was honest, I told her I never rehearse.  I told her I appear almost monthly live on my local TV station and I'm more natural just winging it.  She trusted me, besides, she viewed many of my live segments from my YouTube and Vimeo channels.  We recorded an intro to my segment.  Perfect they said, after one take.  I then revved up the hot glue guns and got everything in place.  When they told me the questions she would be asking me, I stopped them again and said it would be more realistic and seem less contrived if she just asked me the questions.  I didn't want to know what they were in advance because I know myself,  I would overthink it.  I wanted it to flow naturally and they seemed content with my explanation and happy with my confidence.  I reminded them not to worry, that I learned by experience to talk fast, tell people what they want to hear and make it all look effortless simultaneously. 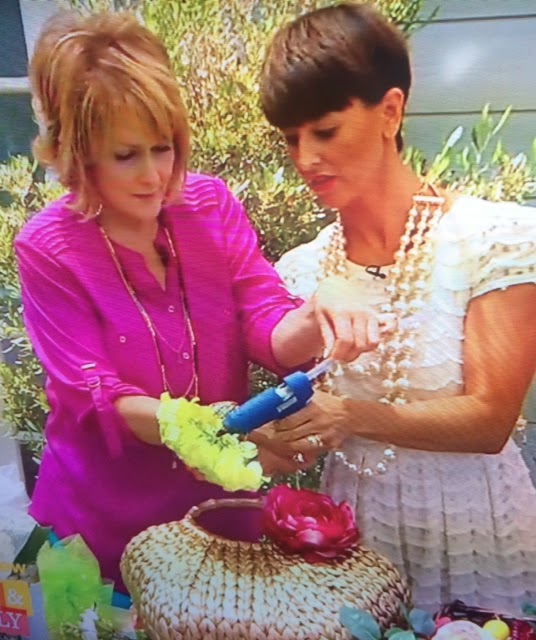 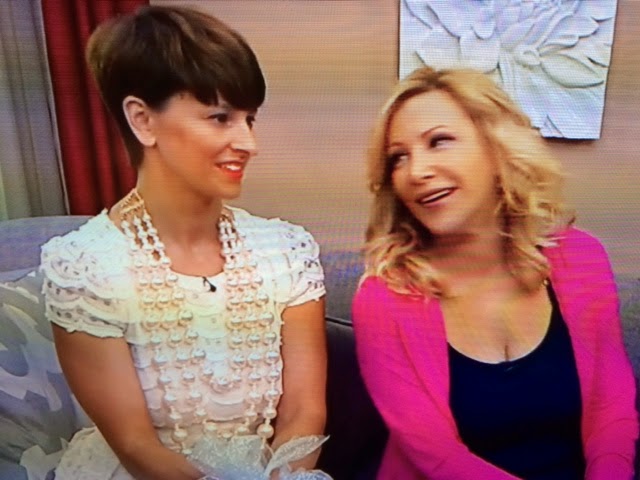 On that note, out came host Cristina Ferrare and her hilariously talented sidekick beauty expert, Kym Douglas who were joining me on my DIY segment.  Directors and producers began going over instructions to all, as make up artists hovered back and forth with their tool belt-like, make up belts watching the high def TV's and doing make up touches where needed.  This was Hollywood baby and it was beyond a dream come true.  The countdown began backwards and my nationally televised segment officially began.  It went off without a hitch, not a single ounce of nervousness existed.  I was in my world, doing exactly what I do best, creating beauty effortlessly.  The reactions of the hosts, cast and crew were priceless, the pure joy of both the beauty and simplicity of the project and the fact I never stumbled, not even for a second had them completely over joyed.  I made their job easy and that, my friends, was half the battle.  From there, we went on to record the show intro and. On that note, Mark Steins, Cristina Ferrare, the rest of the cast and guest were all-strategic placed on a stool in front of a live studio audience.  All they while through the entire recording, the busloads of tourists snapped their pictures and waved.  I was asked to stay the remainder of the day to participate in other portions of this amazing two hour long show.  I could go on and on about how surreal it was, but I will not. 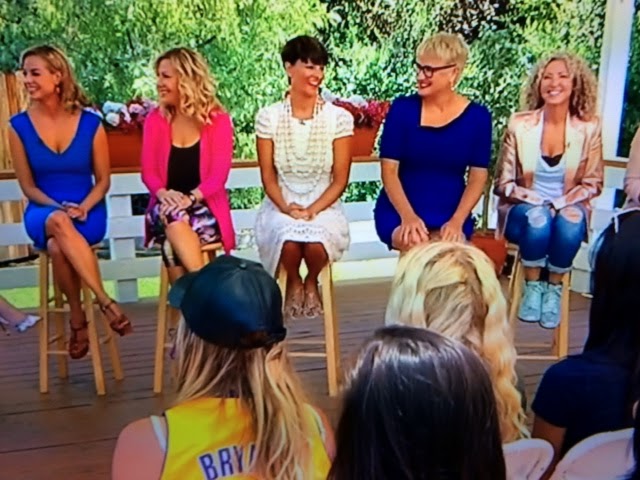 What I can tell you is that I felt important there, because they went out of their way to let me know I truly was.  I made amazing friends, people like me, which honestly, where I live is not so easy to find.  I was told, "you belong here," by the producers and the cast and that I was welcome back anytime and to start pitching ideas because there was still some time before their season was coming to a close.  Cristina loved my necklace, and I removed it right from my neck immediately following the show and placed it on hers.  She wanted to pay me and I refused, as I thanked her for an unbelievable opportunity of national exposure.  The only thing I asked was that she pass along my blog info if anyone wanted to purchase a necklace.  Her reply, not only will I do that, but I'm wearing a black dress to the Emmy's and now I have the perfect accessory for it.  I was elated.  Cristina's Ferrare was angelic, as sweet as pie.  Her voice was soft, yet powerful and Mark Steins was such a natural funny man, an off the cuff, quick-witted host.  The pair couldn't have been more perfect for the show, it's no wonder they received an Emmy this year.  This show truly was about feeling at home and part of one big happy family.  Thank you to the entire cast and crew for a "dream" day in the spotlight. 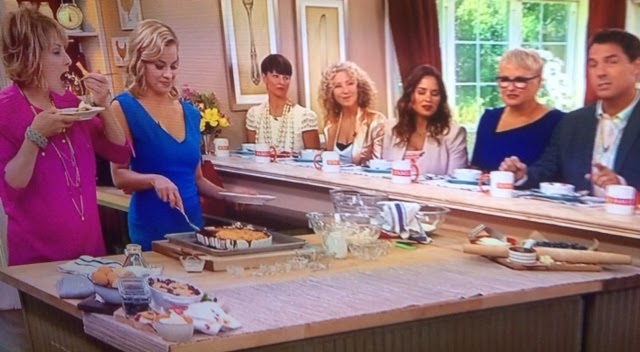 To my readers, I am waiting for a copy of the show and will have it posted in the near future.  As for my future, it's looking bright, so stick with me, say a prayer and sit tight!  I'm off to New York City this week to discuss a concept for my next endeavor with someone very special, my new guardian angel, who for now, we will call her "flower."