For as long as I can remember, there was a list of specific fruits, veggies and nuts that caused my mouth and ears to itch and my lips and/or mouth to develop a “fever sore-like” blister.  This went on for 40 years.  Doctors told me it was either a form of mouth herpes or looked at me like I was crazy.  My brothers complained of similar allergies. My mother used to say, “it’s just a little oral allergy and it will eventually go away. I get it all the time.”

I come across others from time to time who faced this similar mysterious challenge. I always knew something was not quite right and this was not the norm.  Thirty-nine some odd years later, I had to take my oldest son to the allergist and it was then that I decided to “get his ear” about my own issues.  I explained these mysterious symptoms to the doctor. I told him that over the years, I observed the occurrences and recognized a pattern; the itchy and blistery reaction only happened when the fruit or vegetable I would eat was out of season. The allergist was quite surprised by my intuitive observations and said, “You are absolutely right, my dear. What is happening is that the food you are reacting to is cross-contaminated by the trees you are allergic to during the food’s off-season.”

It was then that all the puzzle pieces began fitting together.

I mentioned in a previous blog that I went gluten-free at age 40. I stopped eating all the fruits, veggies and nuts that were causing my irritation as well.  One year later, I decided to test the waters and try one of those fruits again, hoping to re-introduce it into my diet.  To my surprise, I had no reaction whatsoever!  OMG, I cleaned out my system!  I don’t know the scientific reason behind my self cleanse, but I do know it worked.   I now only purchase organic fruits and veggies and to date, have NOT experienced any reactions.  I re-introduced almost everything back into my diet that I was allergic to except one: walnuts!  I’m getting there though.

Sitting on a Park and Recreation Committee within my township, has been extremely educational.  Our board discussed a situation recently regarding pesticides and the spraying of the ball fields where our children play.  I absorbed the information, processed it and began thinking that pesticides, without a doubt, play an important role in the crops we are ingesting.  Actually, I’ve been wondering if pesticides were also playing a role in my oral allergies. Researching this lead me to an amazing website, www.EWG.org.  This is the Environmental Work Group’s website.  If you have any questions regarding foods, pesticides, sunscreen (basically anything environmentally related), this is the site for you.  It was here that I came across the “DIRTY DOZEN.”  These are the twelve fruits and vegetables with the highest pesticide residue. 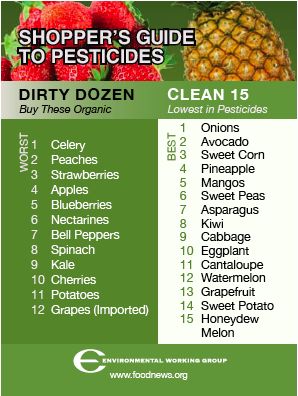